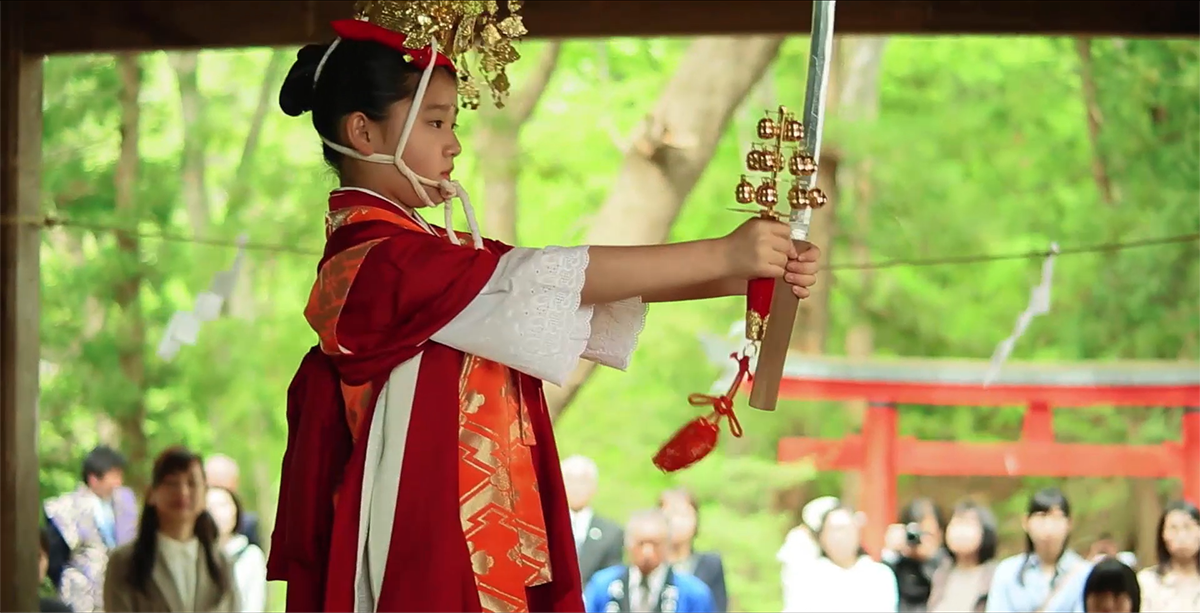 The screenplay, which won the Semi Grand Prix at the Mt. Fuji Kawaguchiko Film Festival with a motif of the "Chigomai" of Kawaguchi, which is an important intangible folk cultural property of Japan, was made into a movie.
The original draft and the screenplay were written by Osamu Masuyama, a former artist for Studio Ghibli.
The girl who danced the "Chigomai" was played by Kokone Hamada, who won a Japan Academy Award for Best New Actress. Her grandfather was played by the accomplished actor, Ren Osugi, who passed away suddenly in 2018.
HEAVENESE, who is actively propagating the heart of Japan in the world as civilian diplomats under the auspices of the Ministry of Foreign Affairs, was involved in the music.
The director, Yuichi Onuma a prominent figure in the movie industry, thoughtfully portrays the sensitive feelings of a suffering couple who are played by Akiko Kato and Tomoya Shiraishi. 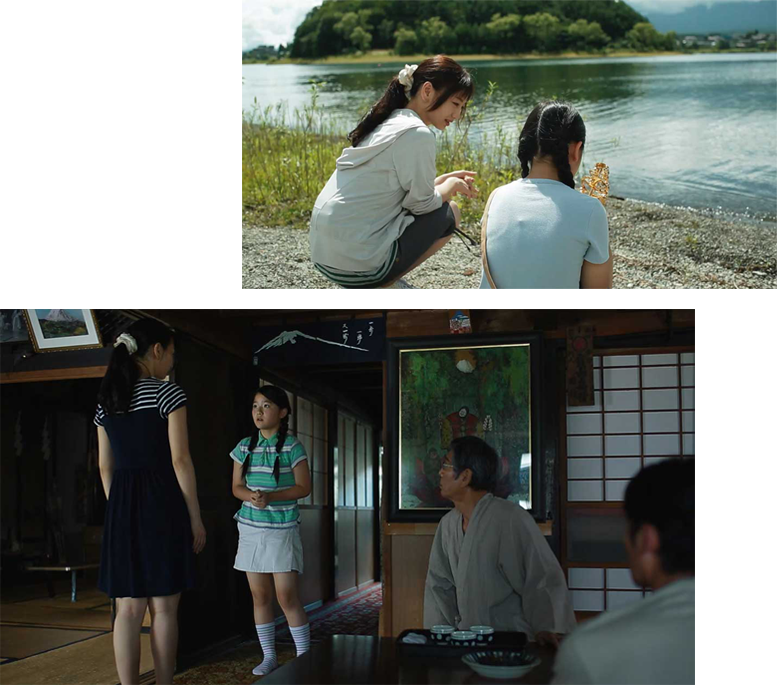 Although Kyoko (Akiko Kato), a flute player, and Ken (Tomoya Shiraishi) were seen as happily married musicians, in the wake of Ken's comment concerning his wife's infertility, they are on the brink of divorce.
In the midst of this, Ken's father (Ren Osugi) asked them to adopt their niece, Rin (Kokone Hamada), who had lost her parents in an accident.
Rin is a dancer of the "Chigomai" of Kawaguchi, which has a thousand-year tradition. She can only continue to dance on the condition that she has parents.
Rin wants to continue dancing the "Chigomai", but still has difficulty accepting Ken and Kyoko as her parents. Kyoko does not want to be reconciled with her husband, but she is developing a heart for Rin.
What will happen to this relationship as they face the things of "life" that can not be controlled by them...

Born in 2004 in Miyazaki Prefecture, Kokone has appeared in local commercials since she was three years old. In the 2013 film Oshin, she was selected as the protagonist, Shin Tanimura, from around 2,500 people who auditioned nationwide over a six month period. Her performance in this film won her the 37th Japan Academy Award for Best New Actress, the 37th Yamaji Fumiko Film Prize, the 25th New Actress Prize, and the 68th Mainichi Film Competition Suponichi Grand Prix Rookie Prize. Kokone was also awarded the 27th Iran Isfahan International Film Festival for Children and Youth Youth Actor Award. She was also in the films Tiger Mask, Ogawacho Serenade, Canon, and Kodoku. As for TV dramas, she was in NTV's Omukae Desu, NHK's Ito no Mori no Ie, Osoroshi~Mishimaya Hencho Hyakumonogatari, Keiseisaimin no Otoko・Part 1: Takahashi Korekiyo and Ultraman X, TBS's Never Let Me Go and Aogeba Toutoshi and CX's SMOKING GUN.
On the stage, she was in Dramatic Kojiki written by Moriichi Ichikawa and Anne of Green Gables. 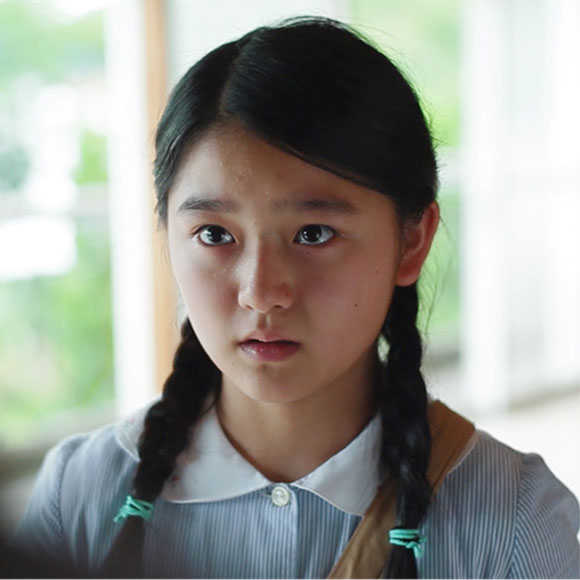 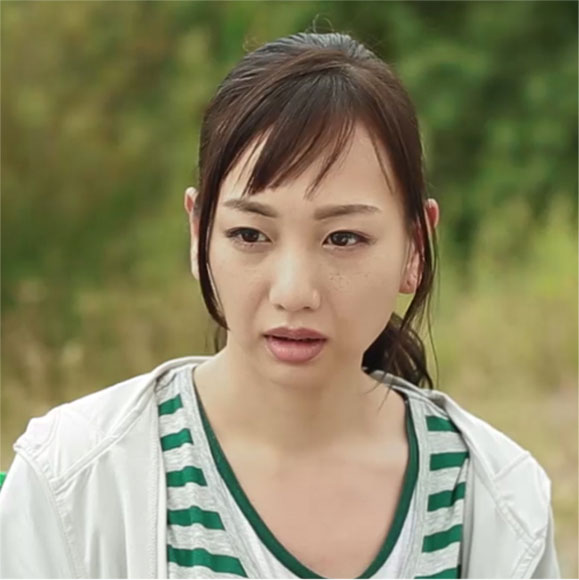 Born in 1982 in Nara Prefecture, Akiko made her debut on the variety show Woman on the Planet (NTV's Wakeari 5 Women, Journey across America!) in 2014. In 2015, she appeared on Cream Stew's Human Roulette, Goddoton, What's Wrong with Me? and Ima Doki!?. After that, she moved on to acting at the recommendation of some in the industry. At the end of the same year, she started acting on the stage as the protagonist in The Maids' Kisses. In 2016, she played the leading role in Homo and Congo, Tales of Fresh Cream and Canary Bar. In the summer of 2016, she debuted on the big screen in Toilet Hanako-san - New Chapter: Hanako vs Yosuke. She also appeared in Info Menju no Smile, Gesu no Namida ('17), and Tomodachi Game Theater Version FINAL ('17). In 2017, she appeared on TBS Radio's Sakidori! Kangeki Theater.

Born in 1979 in Fukushima Prefecture, Tomoya made his debut as a regular in the TV drama Jyokyoshi in 1998. He starred in the film Lady Plastic which was exhibited at the Yubari International Fantastic Film Festival in 2001. His main appearances include the HiGH & LOW Series, Theatre Version S-Last Police, New Okubo Story, Did You Hear the Whistle at No Side, Penalty Game 2, Thanatos, New Shadow Warriors, S-Last Police. In NHK's Taiga Drama, he appeared in the series Heart of a Samurai, and Yae no Sakura, the series HiGH & Low, the drama special Much Ado about Love, The Thorns of Alice, Goodbye Alma, Shinsengumi PEACE MAKER, Oniyome Nikki Ie Yudana, Kunitori Monogatari, Hanamura Daisuke, and so on. He also actively appeared on stage, and was highly praised for his performance in the second performance of Photogenic in Kibako-kai hosted by Yukihiko Tsutsumi (screenplay: Yuichi Fukuda) ('10). He also participated in Kazama Sanso ('11) presented by the theater company Benibarausagidan hosted by IZAM. He also appeared in Paraiso no Umi, Hakaku no Shichinin and ICE CREAM GOOD BYE. 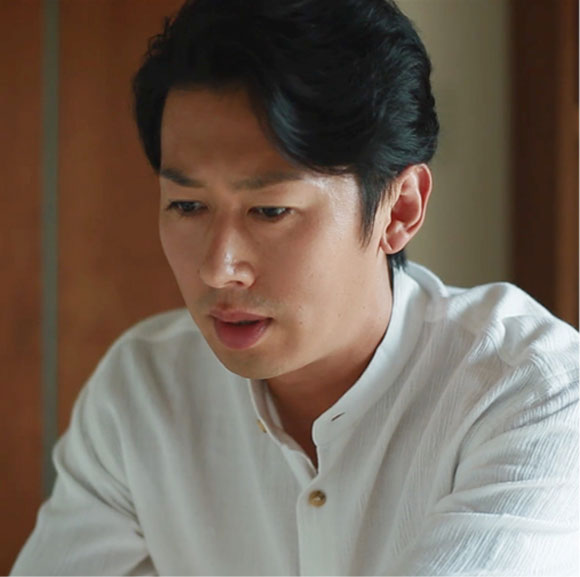 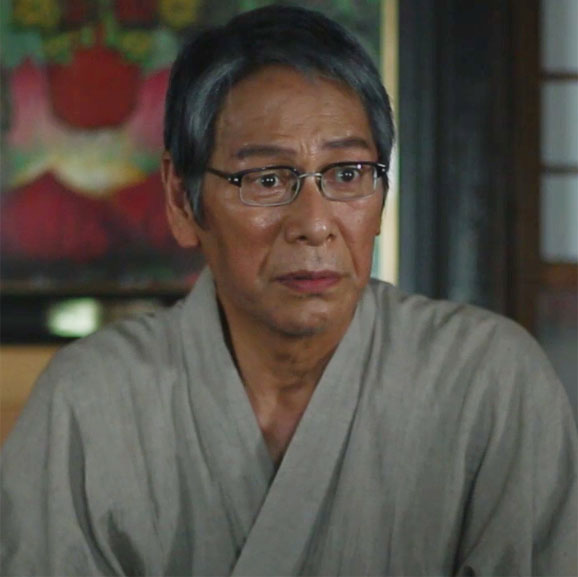 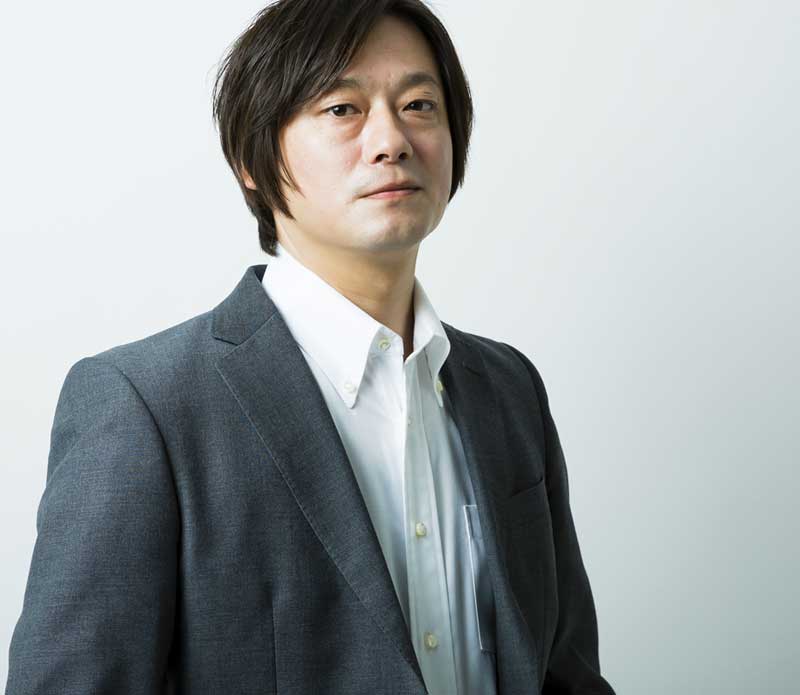 Born in Nagasaki Prefecture in 1974, Osamu worked as an animation artist on Studio Ghibli's feature films Spirited Away, Howl's Moving Castle, and Ponyo and The Girl Who Leapt Through Time. In 2009, he established the studio Inspired with the aim of producing original works. Since then he has been involved in various works such as Eden of the East, Madoka Magica and Your Name.
In 2017, the TV series Made in Abyss became the talk of the town for the movie-quality surreal world it depicted. Besides animation work, Osamu has also been involved with webCM, stage art, product design and so on. His written works include Masuyama Osamu Suisei Gashui (Watercolor Art Collection), The Works of Inspired and The Law of Landscape Sketch Not Taught in School. In the NHK program Anata mo Artist (You Are an Artist, Too), he was a lecturer for two seasons and co-starred with Moto Fuyuki. He has appeared in many informative programs as well.

The act of "offering gifts" has been commonplace to all ethnic groups throughout time. It seems that humans are subconsciously aware that they must be forgiven by someone or something. But it is difficult for us to hear the pure voice deep down in our hearts. It is a shame that we are not in tune to that voice and end up hurting our hearts every day. Chigo, the dancer who holds Kagura bells in the movie, plays the role of a bridge between such people and God. This familiar festival accessory represents the three sacred treasures which consist of a sword, a mirror, and a bell (jewel). I came to write this story because I feel that the key to know life lies hidden in the symbolism of a triune god. As in Chigomai, this project started with the heart of dedication. We ran into seemingly insurmountable walls many times; however, each time a way through was miraculously opened, and we were able to successfully complete it. I sincerely express my gratitude to all those involved for their support.

Born in 1965 in Ibaraki Prefecture, Yuichi entered Nihon Film School after graduating from Hosei University. There he received the Imamura Shohei prize for his graduation project film called Chance Call. After graduation, he gained field experience as an assistant director and made his directorial debut in 2003. His main works are New Half Dank, AKIBA, Dotei Horoki, Nude, The Knot, Schoolgirl Complex - Broadcasting Section, etc. Each of his works have been highly acclaimed at foreign film festivals. Kuujin was officially listed at the 14th Orlando International Film Festival in 2015, and in the same year he was officially invited to the 5th Golden Door International Film Festival. His popularity continues to grow as he has been working as the director of the TV drama Saki since 2016. His latest work is the 2018 film Saki Achiga-hen episode of side-A. 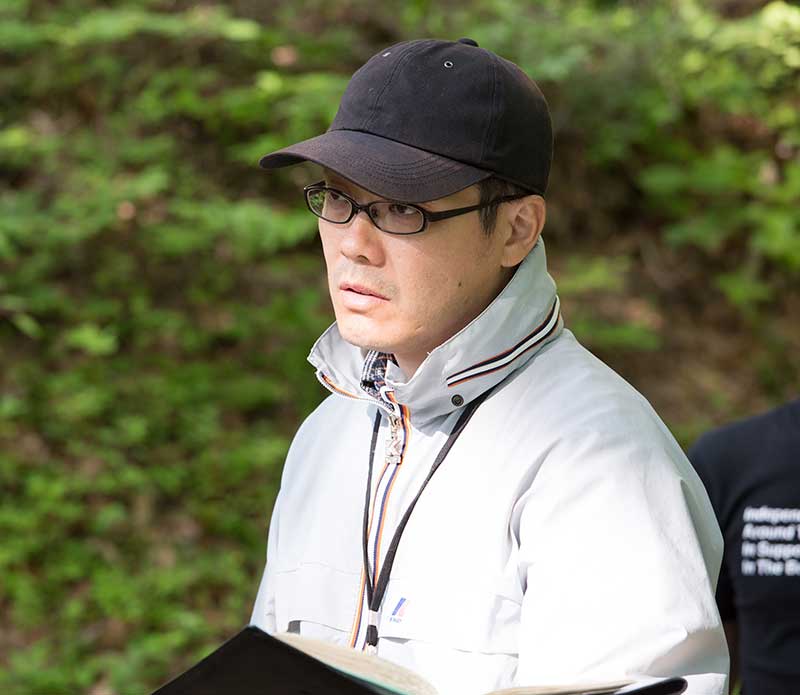 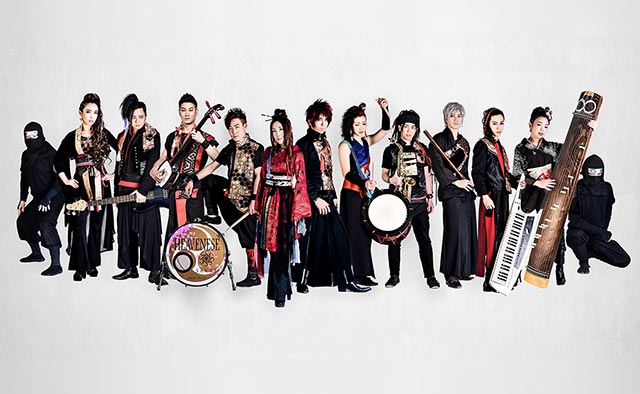 HEAVENESE is a music troupe which stands on the belief that the Japanese spirit of “Yamato”(harmony) can save the world.
In 2012, HEAVENESE made its worldwide debut on Sheila E's label and is the only entertainment group in the world produced by the late Andre Crouch, the King of Gospel and nine-time Grammy Award winner. With vocalists Marre & Kumiko at the center of the band, HEAVENESE blends Western instruments such as drums, bass guitar, keyboard, sax and others, and Japanese instruments such as shakuhachi and shinobue (bamboo flutes), Japanese drums, Tsugaru shamisen (Japanese banjo) and so on.

HEAVENESE's performances are masterpieces, a fusion of the Japanese Spirit and HIP HOP/R&B all intertwined with the heart of the gospel.

HEAVENESE is sponsored by the Ministry of Foreign Affairs and has been on tours both domestically and internationally in the United States, Israel, Ethiopia, and Taiwan and has received high acclaim as a civilian diplomat.